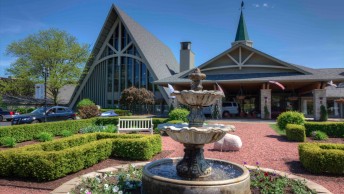 My six-year-old boy just caught a fish. We’re standing where the edge of the green lawn meets the boat docks on Lake Geneva at The Abbey Resort and, after only a few minutes of casting, a nervy sunfish has brazenly decided to try to make off with his bait. After a furious battle, my son reels the creature in and lifts it into the air to admire it, the first of half a dozen that we will catch that afternoon. He’s acting like he just[…]